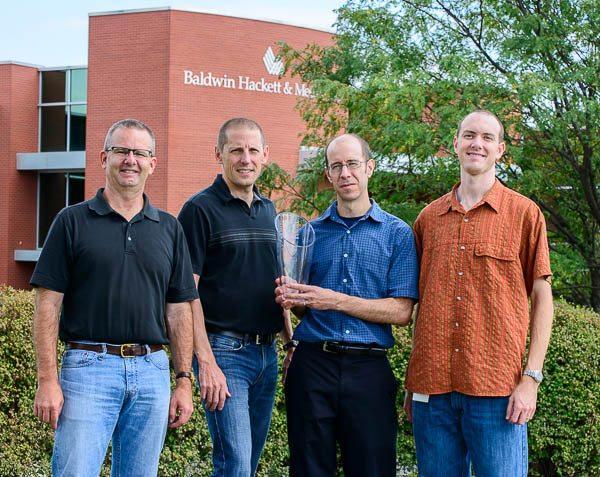 BHMI would like to congratulate employees Scott Boje, Bob Brindamour, Matt Stefan, and Kevin Walters for placing first in the Division A men’s group at the 33rd Annual Corporate Cup Run in Omaha.

This year’s Corporate Cup on Sunday, September 15th drew thousands of runners and walkers representing corporations throughout the

Omaha area to raise funds for the American Lung Association.

The American Lung Association is the oldest voluntary health organization in the United States. Founded in 1904 to fight tuberculosis, today the ALA fights lung disease in all its forms, with special emphasis on asthma, tobacco control, and environmental health. Funds raised by the Corporate Cup help the fight against lung disease and also support more than 200,000 Nebraskans who currently suffer from lung disease!

The Corporate Cup is among the largest corporate road races in the United States, recently ranked “10th Best 10K Run” by America’s Best and Top Ten website. From the first Corporate Cup in 1981, the event has experienced phenomenal success. In that first year, 29 companies entered, and 681 runners crossed the finish line. In 2012, 262 companies entered with more than 11,000 registrants. This year, the event drew over 15,000 runners and walkers.

This year’s course presented a greater challenge to runners.  Since 1981 the race has been held in downtown Omaha and featured a relatively straight and flat course.  In contrast, this year’s new course at Aksarben Village was characterized by many turns and rolling hills.  BHMI’s team captain, Scott Boje, said they didn’t mind having to work a little harder.  With every breath, they were reminded of the people who struggle to breathe.

The champion’s trophy was presented to BHMI team members at the official Corporate Cup Awards Celebration at the Scott Conference Center on October 2nd.

BHMI is proud of its team and the commitment of team members to do their best both on and off the job.